One of my lefty friends recently posted this meme on Facebook. The meme originated with Occupy Seattle. 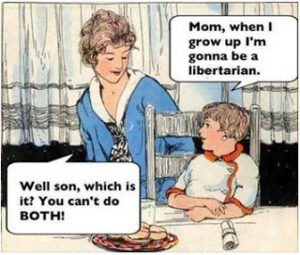 Statism, on the other hand, advocates the use of force to get otherwise peaceful individuals to kowtow to the will of others, those in government, because they know better.  Statism is okay with using coercion and compulsion to force people to do things the statist believes he should do because it is for his own good.

Let’s take a very simple example, seat belts. Seat belts are a great invention. Undoubtedly they have saved many lives. I use my seat belt all the time. I consider it folly not to.

That said, as a libertarian, I consider it none of my business whether you or anyone else wears a seat belt. It is a private decision that should be left to adult individuals to decide for themselves.

The statist, on the other hand, favours laws making seat belt use mandatory. They favour using the apparatus of coercion and compulsion to force people to wear seat belts whether they want to or not. They do so because, like parents, they feel the need to treat people like children.

Now growing up entails several things. It means we give up having our mommies and daddies making decisions for us and learning to make our own decisions, even if we sometimes make mistakes in the process. It means learning to live peacefully with other people, settling disputes by discussion and rational persuasion, not by force like the bully in the school yard. It means becoming self-sustaining individuals, finding productive work so we can supply ourselves with food and shelter.

As a child, all these things are decided for us by our parents and teachers. Our parents curb behaviour they believe may be destructive to self or others. They compel behaviour they believe is for our own good, such as eating our vegetables or wearing a seat belt. Food and shelter are provided by our parents until we are grown up and ready to leave home to become autonomous individuals.

But for the statist, children do not grow up. They must remain forever children with the state taking the place of the parents. Rightfully, the state does intervene when force or fraud are used. It is acting as an agency of self-defense for the victim of aggression. But, unfortunately, the state does not limit itself to a self-defense function when it is run by statists.

The adult in a statist society is treated like a child. He is not allowed to grow up. The adult in a libertarian society, on the other hand, is treated as an adult, encouraged to make decisions and make his way in the world.

Here is the meme revised to be truthful. 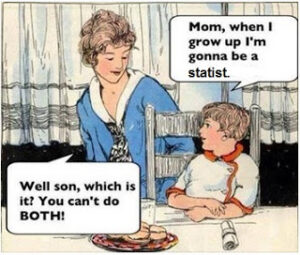