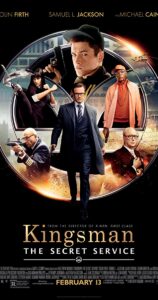 Just saw the new movie Kingsman: The Secret Service. It has a very libertarian feel to it. The movie is a bit of a spoof on the spy movie genre, which crosses the gadgetry, high tech wizardry and violence of the James Bond films with the stylishness of The Avengers (the old TV spy series featuring John Steed and Emma Peel).

But what will especially appeal to libertarians is the plot. First, the spy agency is a private one, not a government one. Secondly, the villain is an eccentric billionaire obsessed about global warming. Like Prince Phillip who once infamously said, ” In the event that I am reincarnated, I would like to return as a deadly virus, to contribute something to solving overpopulation,” the villain believes humankind is a blight on the earth and believes the only solution is to wipe out as much of humanity as possible.

Being an eccentric billionaire, he has the means to engineer a plot to do just that. Part of his plan involves enlisting the support of politicians and celebrities the world over, who, of course, will be saved. Those politicians and celebrities who balk at his mad scheme are imprisoned in his mountain fortress. There are reports in the mainstream press of many people mysteriously disappearing.

The Kingsman agency saves the day in the end and all the toady politicians and celebrities who went along with the villain’s anti-human plot get their come-uppance.

To tell you more would give away too much. But this is a great movie. Colin Firth is excellent as the top spy. Taron Egerton does a great job as Firth’s protege and trainee spy. And Samuel Jackson hams it up as the evil villain.