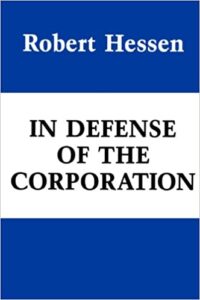 There has been a lot of antagonism towards corporations. Surprisingly, not all of it from the left. I’ve come across a fair number of Facebook posts and articles from purported libertarians condemning the corporation as a creation of the state, and arguing that corporations wouldn’t exist in a true free market economy.

The primary arguments that the corporation is a creature of the state are threefold – that the corporation has entity status ( it can sue and be sued in its own name, own property, and do all the things a legal person can), that it has perpetual life (that it exists beyond the lifespan of any individual share owner, effectively in perpetuity if it doesn’t fold or go bankrupt) and that its share holders have limited  liability.

These arguments are not new.  Robert Hessen, in this excellent short book (115 pages), sets out to demolish these arguments and he does so with logic and rigor. The book came out in 1979 and was a response to the call for federal chartering and rigid control over corporations in 1973 and 1976 books from Ralph Nader.

The argument that corporations are a creature of the state is called the concession theory of corporations. They exist as a concession of government. Hessen argues that this was once true. It is a relic of the days of absolute monarchy when businesses could not operate unless they sought permission from the sovereign.

And early America followed a similar route.  In 1832, the authors of the first treatise on corporations in America wrote that “The state, or commonwealth, stands in the place of the King.” This view persisted, even though the nature of corporations changed significantly. Frederick Maitland, in 1900, wrote “The corporation is, and must be, the creature of the State. Into its nostrils the State must breathe the breath of a fictitious life.”

Hessen expertly traces the history of corporations and argues that the nature of corporations changed from a privilege granted by the state (which had to be petitioned for) to a pro forma contract which the government was obliged to provide to any and all comers who satisfied the minimum requirements for incorporation.  This revolution in thinking began in 1837 when Connecticut passed the first such statute.

As Hessen puts it, “instead of obtaining a special charter from the state legislature, the promoters of a corporation merely had to file certain information with an official of the state government.”  The reason for this change was, in fact, a public backlash against special privileges and monopolies being granted to some favoured friends with political connections.  In other words, a backlash against crony capitalism. Now anyone that wanted to create a corporation could do so by filing an application and they could not be refused.

Hessen goes into the issues of entity, perpetuity and limited liability in some detail, arguing that none of these features require state sanction or permission. They are a form of contract and laws of incorporation are the registering of contracts.

Hessen does acknowledge that some businesses do seek special favours from government. What today we call crony capitalism. But he argues that this is not a problem inherent in corporations qua corporations.  “There is no justification for allowing any private individual or business organization, including corporations of any size, to achieve its goals by means of political power,” he says.

He cites E.L. Godkin, a critic of the American scene from the 19th century who “warned that chicanery and corruption are inevitable and cannot be eradicated as long as government has favors to bestow. Godkin offered a solution: stripping Congress of the power to confer valuable privileges upon anyone, including business corporations.”

In a final section on Nader’s vision of Utopia, he argues that Nader is an adherent of Rousseau’s idea of The Social Contract. Rousseau argued for simple small communities. Why? Because, argues Hessen, “the appeal of the small community is that it will be easier to enforce self-renunciation and conformity. Proximity and visibility mean that everyone can monitor everyone else’s attitudes and actions; there is no chance for escape from constant surveillance. It is a paradise for inquisitors and informers, but a living hell for those who value privacy, independence, and personal freedom.” The picture he paints is of grim egalitarian communities with no luxuries and no differentiation between individuals.

That is, perhaps, going a bit off tangent to the central thesis of the book.  So let me just quote his conclusion, which says it all. “A proper defense of corporations must stress that they are created and sustained by freedom of association and contract, that the source of freedom is not governmental permission but individual rights, and that these rights are not suddenly forfeited when a business grows beyond some arbitrarily defined size.”

This is a concise and vigorously argued book, well worth the read, especially now when the very concept of the corporation is under steady attack.